skip to main | skip to sidebar

Vayikra 26:3;
If you will follow My decrees and observe My commandments and perform them; then I will provide your rains in their time, and the land will give its produce and the tree of the field will give its fruit.

Vayikra  26:14-18
But if you will not listen to Me and will not perform all of these commandments; If you consider My decrees loathsome, and if your being rejects My ordinances, so as not to perform all My commandments, so that you annul My covenant—then I will do the same to you; I will assign upon you panic, swelling lesions, and burning fever, which cause eyes to long and souls to suffer; you will sow your seeds in vain for your enemies will eat it.  I will turn My attention against you, you will be struck down before enemies; those who hate you will subjugate you—you will flee with no one pursuing you. If despite this you do not heed Me, then I shall punish you further, seven ways for your sins.

Anti-semitism is one of the tools Hashem uses to punish us.  Harav Naftali Hoffner explains it clearly in his book Our Faith, Our Strength;

COMMUNAL PUNISHMENT
63. ANTISEMITISM AND ITS SIGNIFICANCE

a. The real reason for anti-Semitism (which would seem to be completely unjustified) is clearly explained by the following Midrash (in connection with what happened before the exodus from Egypt): “When Yoseph died, they [i.e.the children of Israel] did away with the Brith Milah Mitzvah,  claiming lets be like the Egyptians!
…Because of this the Almighty turned the affection which the Eyptians had for Israel into hatred as it says: ‘He turned their heart to hate His nation, to plot against His servants’”

b. Likewise in our times, in reaction to the tendency of a considerable section of our people to be ‘like the other nations’ (a process which starts with ignoring the Mitzvoth – and gradually moves toward assimilation and intermarriage with the goyim) we are faced by communal punishment (according to the measure –for- measure principle) of anti-Semitism (which impedes assimilation).

c. The purpose of communal punishment is-- to serve as a clear warning to all of us to improve our ways, before our situation deteriorates further. Note: for instance, when the Nazi regime came to power in Germany more than 60 years ago (then according to the ‘measure-for-measure’):

1. During the first month of power, they prohibited all mixed marriages between Jews and non-Jews (at the time, the rate of such marriages had reached 50% in some places!!).

2. About 2 months after he seized power, on April 1st, ’33, which fell on a Shabath, he ordered SA-guards to stand at the entrance of each Jewish-owned store, open on that Shabath, to warn any potential customer that the store was owned by a Jew and should therefore be boycotted. –There could have been no clearer warning against the desecration of the Shabath!!

I don’t think anyone is unaware of the increase in antisemitism around the world in the past decade. However, I think most are unaware of the increase in interfaith relations in the same time period and their correlation.  It is shocking  to me how many Jews believe interfaith dialogue, breaking down the walls of separation between Jew and non-Jew and building bridges between “faith communities” is the solution to anti-semitism when it is actually one of the causes.  After all, they say, there is really no difference between us and them and once we show them this, peace will reign in the world.

The most disturbing part of this issue are the so-called “religious” Jews, even Rabbis, that are not only involved in this interfaith movement but leading it.  They have put a new spin on things.  Instead of assimilating amongst the goyim, they are trying to assimilate the goyim amongst Am Yisrael.  They may be able to fool some people with their righteous claim of being “a light to the nations” but Hashem is not fooled.  The goal is the same: to mingle and become one with the goyim (by making the goyim into quasi-Jews) and to destroy Judaism (by corrupting halachah or claiming it is no longer relevant at all and infusing Torah with foreign ideas and philosophies).

These xian loving Jews disregard the halachah, the ways of our forefathers and the words of our sages regarding relations with non-Jews.  They are new Jews and their Judaism is all about love and tolerance and becoming one with the goyim.   They have traded our covenant with Hashem for a covenant with the goyim.  We are to be “ovdei Hashem”, but they are more focused on the religious experience they get  from Judaism than  serving and obeying Hashem . These Jews take the exalted mission our people to be a nation of priests who serve Hashem and have degraded it into being a nation whose purpose is to serve the goyim. Of course in reality these Jews only serve themselves .  We are taught to fear Hashem, to obey Hashem andto be in awe of Hashem.

These Jews do not fear Hashem or they would never be able to reduce Judaism, Torah, Shabbat and our sacred relationship to Hashem to a “religious experience” as the latest high to be marketed to the masses. 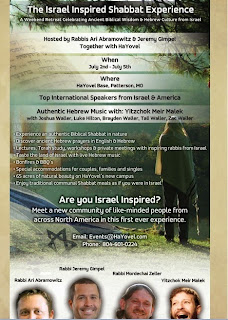 If you behave casually with Me and refuse to heed Me, then I shall lay a further blow upon you—seven ways like your sins.

In the commentary it is written;

קרי Casually.  The translation follows Rashi’s primary interpretation according to Sifra.  It means that despite the punishments, your performance of the commandments will be haphazard and erratic; you will treat them as a matter of choice and convenience, rather than as divinely imposed obligations.

These people "celebrate" Shabbat and what they get from it, they do not "observe" Shabbat as commanded by the Almighty.

"The argument of the nations here is that we must achieve unity and break down the walls of separation. Is this not fair and logical according the the false thinking of the worshippers of foriegn culture? Is not the unity of all nations and the disappearance of the differences between Israel and the nations the goal of the Hellenists...."

"G-d decreed upon holy Israel that they must be separated from impurity and from the impure nations. The idolatry and foreign culture of the nations cannot coexist with G-d's Torah or with G-d himself."